How human poop is being used to make strong building bricks 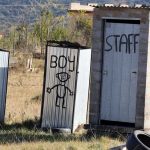 An Australian professor Abbas Mohajerani has found a way of turning human waste into bricks for building.

“By turning biosolids into bricks, you can recycle the world’s stockpiles of treated sewage sludge and boost sustainability in the construction industry,” Mohajerani and his team of researchers wrote in their study, “Green building materials”, and published in a special edition of the journal Buildings.

But what are biosolids? This is the scientific way of referring to human waste, but according to sciencealert.com, a website that tracks new scientific findings in the field of waste management, biosolids are a by-product of the waste water treatment process that can be used as fertiliser, in land rehabilitation, and now, as construction material.

“Using these ‘biosolids’ in bricks could be a surprisingly effective way of repurposing all that former sludge,” added Mohajerani, who teaches engineering at RMIT University.

Besides reducing the cost of building, the researchers also found that dried faeces is more porous, and therefore better insulators.

When used to make bricks, they would help retain more heat.

In Kenya, there are no official records, but the Nairobi Water and Sewerage Company (Newasco) receives a paltry 100,000 litres of human sludge daily at its Ruai treatment plant, out of the expected 500,000 cubic litres.

Ordinarily, bricks are made by using a mix of clay or concrete materials. The blend is then left to dry or dried industrially and transported to construction sites or reselling agents.

For bricks made of human waste, the process does not end here. Biosolids are added to make the blocks sturdier — blocks that are also cheaper.

“Yes, they are killing many birds with one stone,” says Simon Githinji, a medical laboratory technician studying for a degree in waste management.

When we dig out stones, he observes, we leave behind trenches and gorges that undermine land rehabilitation while also harbouring stagnant water and agents of many waterborne diseases.

The researchers observed this too. They noted that the 1.5 trillion bricks produced globally require some 3.13 billion cubic metres of clay soil and other concrete materials.

To put it into perspective, the researchers explained, this is the equivalent of 1,000 soccer fields, dug to a depth of 440 metres or 1,440 feet.

William Maina, an artisan in Iciara Sub-County, Embu County, uses the bricks to build energy-saving jikos. He explains that a single brick costs between Sh15 and Sh20.

Drawing from statistics from the study, were he to use these revolutionary bricks, a brick would cost between Sh8 and Sh10.

“When we factor in the reduced cost of producing the bricks from the study, the cost of putting up a similar house using these bricks would come to Sh230,000.”

Previous research has found that it is also possible to turn human urine into bricks. Students in South Africa collected the waste from urinals in their university and mixed it with sand and bacteria.

The process, known as microbial carbonate precipitation, allows the building materials to be created at room temperature, a process that is far more energy-efficient than firing clay bricks inside kilns that operate at an optimum temperature of 1,371.12oC or 2,500F.

The new method instead produces nitrogen and potassium, which can be used as commercial fertiliser.

Urine is collected in novel fertiliser-producing urinals and used to make a solid industrial product, with the remaining liquid used to make the brick.

“Bacteria in the form of urease break down the urea in the liquid urine while producing calcium carbonate through a chemical reaction. That cements the sand into the desired shape, which could be a column as well as a rectangular building brick,” noted the study.

This article first appeared on the DN

Owner selling each at  12m. The property is located in…

Government has banned cooking gas cylinder exchange, brands are only allow to fill their own cylinders

Suraya- some investors think it’s a ponzi protected by the ‘people fro above’…but is it?